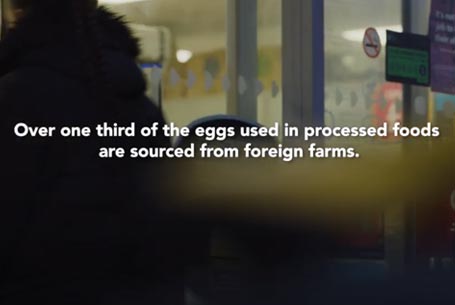 Importing foreign eggs to produce foods like quiche in Britain for British supermarkets is morally wrong and supermarkets should use British eggs produced on British farms for food that is being produced here.

As shoppers we put our trust in British supermarkets to sell safe products and be transparent with their sourcing but they continue to use a significant number of imported eggs in pre-prepared foods, such as quiche or egg sandwiches, that don’t meet the same food safety standards as British Lion eggs. Shoppers are unaware of what they’re being sold because there is little or no information on pack*.

With boxes of shell eggs on sale at supermarkets produced to British Lion quality standards, research shows consumers assume the eggs in the food they buy are also British but in many cases they are imported. In recent years there have been a number of food safety issues associated with egg products produced in Europe and further afield. Using them also adds unnecessary food miles, and does not meet the guaranteed, high standards provided by the British Lion Code for Egg Processing.

British shoppers deserve to eat foods made with egg that meets the highest food safety standards. They also deserve to be told where the eggs in the food they buy comes from so they are free to make informed purchasing decisions.

Please sign and share this petition. Together we can show our support for British farming and stop British supermarkets using imported eggs in British produced food.