How to separate egg whites 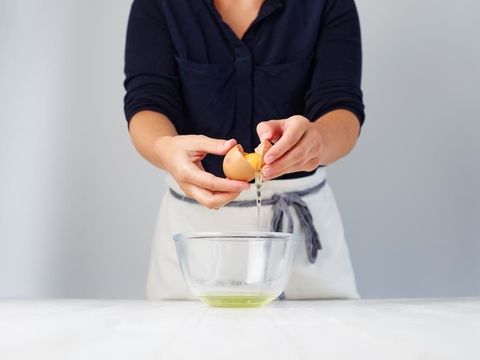 Whether you’re making an extra fluffy omelette or baking a special cake, separating egg whites from the yolk is a vital part of the chef's armoury. Lots of different people will have their own tried and tested methods, but if you’re looking for some handy tricks, read on!

Making the most of the shells

One of the most commonly chosen methods of separating egg whites from the yolk is using the cracked shell. First carefully crack your egg into two, roughly even halves around the widest part of the egg. Once you’ve done this, gently move the yolk between the two shells, allowing the whites to fall into a bowl below. When you’ve got all the whites you can simply add the yolk to another bowl and repeat.

Another very common method for those who aren’t afraid to roll up their sleeves and get their hands eggy! Separating the whites from the yolk by hand is simple; just make sure that your hands are washed properly before you begin.

All you have to do is crack the egg into the outstretched palm of your hand, ensuring that your fingers are closely knitted together. Begin slowly opening up the space between your fingers, letting the egg whites slip into a bowl below. This is best done with eggs which have been refrigerated as egg whites which have been stored in a warmer place tend to be a lot runnier and therefore things can get messy fast!

For a simple, fast and effective way to separate egg whites, the bottle trick is unrivalled. Not only do your hands stay nice and dry, but there’s minimal risk of any rogue pieces of egg shell falling into your whites.

To do this you’ll need a standard sized plastic bottle (around 500ml), a bowl and one egg. Simply crack the egg into the bowl and gently squeeze some air out of the bottle so it’s slightly crumpled. Place the mouth of the bottle over the yolk then slowly release your grip. The yolk should smoothly slide inside the bottle away from the whites – easy!