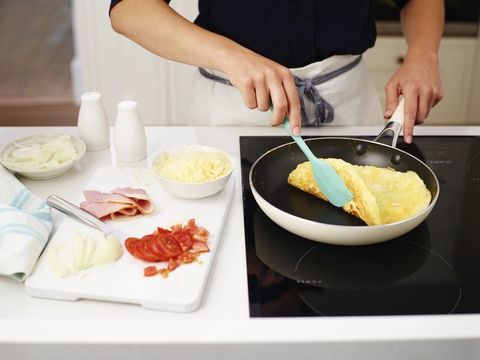 An omelette can have an almost never-ending array of fillings and different combinations which will bring their own unique flavours and textures. It sounds so easy because it is! However if you really want your omelette to be the best it can be then there are one or two things to bear in mind when it comes to dealing with fillings!

Nearly any ingredient can go into an omelette, just make sure it’s not too big and bulky; if you want a steak and potato omelette that’s fine, but chop your ingredients into smaller manageable sizes, say no bigger than your thumbnail. Why do this? When you’re flipping, the bigger the fillings are the more that can go wrong. Your fillings want to be small enough to mould into the body of the omelette, with anything extra being easily folded without the risk of your omelette tearing and breaking into scrambled eggs!

When should you add your fillings? For smaller ingredients such as finely sliced onions and spinach, these can be added into the omelette mixture before it goes to the pan as they’ll quickly form into the body of the omelette. Bigger toppings like ham and chorizo, as well as any type of cheese, should be added once the omelette has just begun to form into a solid shape, about mid-way through cooking. If you prefer your chorizo or ham more crispy, then cook these up a bit first before adding.

Ingredients like chopped mushrooms and bell peppers which require cooking should be softened in the pan first so they’re properly cooked when you serve your omelette; simply cook them half-way through first and then add your mixture on top; that way once the omelette is done they should be cooked to perfection!

Some ideas to get you started!

If you need some filling ideas to get you started then we’ve got you covered!

A simple alternative to the classic cheddar cheese omelette, our brie and chive omelette is quick and easy, but doesn’t skimp on flavour, with rich creamy cheese and chopped chive combining for a deliciously gooey freshness.

This omelette is bursting with authentic Italian flavours and works wonders as a scrumptious summer supper. Combine good quality Parma or Serrano ham, juicy sunblushed tomatoes and let the peppery kick of the rocket tie it all together.

If you’re looking for an omelette with a twist then this Indian-themed omelette is a real winner. Using traditional Indian herbs and spices such as garam masala, cumin and coriander, the tomatoes and onion are brought to life in this low-calorie main which doesn’t hold back on flavour.

For more great ideas for fillings make sure to check out our omelette and tortilla recipes page.